The artists’ collective Ouvidor 63, also known as Centro Cultural Ouvidor, is an occupied 13-store building in downtown São Paulo, functioning since 2014 as home and workspace to circa100 artists, including children from 0 to 10 years old.[1] Rose Steinmetz, artist working in photography and video, participates and documents the artists actions since November 2016.[2]

Rose, since when are you documenting the Occupation? What was the initial motivation?

I arrived at Ouvidor 63 in November 2016, to exhibit my photographic work at a fair organized by the Occupation. I was delighted and identified with the people, their lifestyle, with the diversity, and the creative force emerging from a life with so few resources. Since then, I started photographing people of the community and the building. Besides, I always loved the circus culture they have. I love to shoot the variety shows – which are part of the circus shows at Ouvidor 63.

“The themes go back to strong women, social issues, identities, the feeling of belonging.”

How do you define yourself as an artist?

To define myself as an artist, you need to understand my past. I’ll tell you a little bit about my background. I was born in the Soviet Georgia where I grew up with my maternal grandparents, while my mother lived and worked in another city. Living in an Orthodox Catholic neighborhood, with neighbors and friends attending recently rehabilitated churches, while at home my grandparents maintained the Jewish traditions and for the great festivities and holidays we went to the synagogue. At school, in Russian, I sworn fidelity to communism. At home, we spoke Georgian. Since my childhood I question identity, the language I speak, the feeling of belonging to a place, to a society, to the community, the question “who am I?”, the feeling of being at the margins. The issues surrounding being a woman and feminism interest me a lot. I’ve always been in the presence of strong women; my grandmother, aunt and mother. My grandmother, who worked as a housemaid, first went out to work in the street markets at the age of seven. Later, she raised two daughters alone during the hard times of World War II. The daughters, my mother and aunt, as my grandmother did, traveled alone, worked, looked after the house, and made decisions; an unusual life for that time.

In my work, I want to show these experiences of the past identified in the life of people I meet on the margins of society. The themes go back to strong women, social issues, identities, the feeling of belonging. I want to show the dignity and beauty of people through photography and video. In addition, I have an affective memory with the Circus. My grandmother took me to the circus every week.

The community works as a horizontal self-management, without leaders, and totally non-partisan. Community resolutions are made democratically, by voting, on the weekly general assembly. Each of the 13 floors of the building has its own autonomy to decide policies and actions – maintenance, kitchen, shared spaces and resources, also in weekly meetings. Horizontality and autonomy make people be more responsible for their decisions and actions. The residents feel more connected to the place and to the community, because each one is important, with the right to speak up and to influence both voting and actions. Recycling and creative economy are parts of daily life, and covers everything: fruits and vegetables from the street markets, re-usage of various materials to build structures and objects, to keep the cafeteria etc. There are several organizational groups, such as the General Maintenance Working Group, Carpentry, Welding, Terrace, Water, Theater etc. In addition, there are meetings of activist groups: Coletivo Feminista, Pretxs, Manos, LGBTq+. Each resident can and should fit into one or more of these groups, to learn, to contribute and to feel as an integral and important part of the community.

We are closed at the moment because of the pandemic, but we always receive visitors, and if they come in a group, we offer guided tours. Outsiders highly appreciate the self-management and autonomy in various aspects. Students, master’s students and doctoral candidates from various universities, in the country and abroad, come to visit and work on these various aspects of our community.

“Creativity, free expression, the sense of collectiveness provoke and contaminate inspiration. As well as the creative use of recycled resources, this all increases self-confidence, self-image, the sense of belonging and the value of life in general.”

Which aspects of the art created at Ouvidor 63 improve the lives of who resides and works there, or of those who visit the community?

Art is the fundamental aspect of Ouvidor 63. People who live in the building arrived from significant vulnerable situations due to the great inequality, socioeconomic and racial oppression in Brazil and in Latin America, which directly impacts how families are structured, how people are schooled or professionally trained, and their self-image. Creativity, free expression, the sense of collectiveness provoke and contaminate inspiration. As well as the creative use of recycled resources, this all increases self-confidence, self-image, the sense of belonging and the value of life in general. There is a lot of offers of art workshops, each one teaching what they have learned and what they know. Art is being expressed in various forms, without any limitation: painting, collages and handmade notebooks, screen printing, clothing customization, toy-art, terrariums, graffiti, makeup, tattoos, crafts, performance, dance, music, theater, audiovisual, photography, carpentry. A great and impacting modality among all these categories of art is the Circus, which has been developed over the years in a very impressive way. There is a theater, which undergoes renovation nowadays, where there are the circus and the variety shows. The Circus Collective is composed of Brazilians and travelers from the whole Latin America. Bodywork along with performativity, performing every fortnight, for sure, contribute a lot to self-image, feeling of belonging and self-realization.

Visitors are always impressed by the quality and diversity of the art created at the Ouvidor 63. The Circus shows are always crowded.

Do you see the Ouvidor 63 as a political act? Do the other artists see their activity as political acts? Tell us a little, please.

Ouvidor 63is a nonpartisan group, but the fact that the Occupation exists for six years is a political act. Artists and citizens who have been marginalized, repressed and oppressed by the system manage to live, develop and create in the autonomous, horizontal self-management, through creative economy, without any government aid. This is a political act. The existence of Feminist, LGBTQIA+, Black, Circus collectives, composed by Brazilians, immigrants and travelers, altogether, is a political act.

Our art is non-elitist, it is for everyone, and our events are always donation-based, without a fixed entrance fee.

Do you think we are talking about an art of resistance? If yes, resistance to what? Why?

The art made at Ouvidor 63 is art of resistance. Everything is done with very few resources, recycled or street-found materials. There is lack of all and scarcity all the time, and people keep on creating, building and developing in spite of it all. Situations of oppression, racism, machismo, various phobias (homophobia, xenophobia, transphobia), feminism as resistance, are being expressed in graffiti, paintings, collages, handmade notebooks, as customized hand-painted clothes, in the Circus shows and much more.

What is the relationship between the artists from Ouvidor 63 and art agents in the city of São Paulo, such as biennials, fairs, galleries, festivals, etc?

Ouvidor 63 was going to have a great art exhibition at Centro Cultural de São Paulo (CCSP), unfortunately the exhibition was postponed due to the pandemic. The circus artists have connections to the Center for Circus Memory at Galeria Olido. The collective presented a few times there, and there are artists who are active members of the Center. Artists participate in fairs such as Feira Miolo(s), Tijuana, among others. 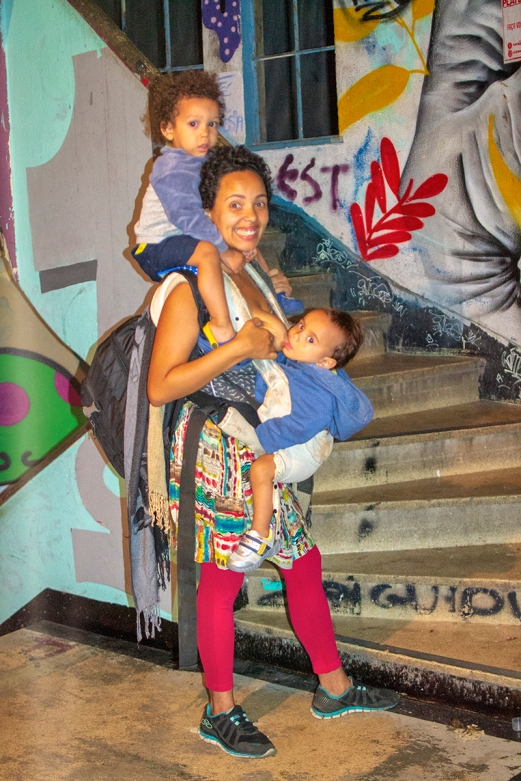 The Octopus in the Parking Garage 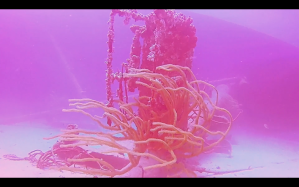 New work: The Octopus in the Parking Garage. Check it out.